Maps and Monsters in Medieval England is now out in paperback due to, as my editor put it “consistently strong sales.” So: In the interest of selling a few, they can be found here.

Since the hardback is now $110 (egad), the 40 bucks is a (comparatively) good deal. Buy a few and convince the publisher that monsters are a hot topic, so they will publish more in our ever-growing field!

Seems our work on hybrids will set us up to be best enabled to handle the (somewhat frightful) techno-cyto-hybridized beings of the future. Sort of. Check out this NYTimes article.

From Brian Hoggard, a photo from our inaugural meeting. He writes:
I know there’s already an excellent napkin pic on the blog site but thought I should contribute this in the interests of the heritage of the group. I have another photo taken without flash if you wish to have that too.
I’m looking forward to moments of intense monstrosity with this group.
Brian.
www.apotropaios.co.uk

Thanks to Phillip, our proposals for Kalamazoo 2009 are in. Most interestingly, as Phillip writes, “the Kalamazoo folks wrote to me on Friday confirming receipt of the MEARCSTAPA proposals, but asked for a constitution or mission statement about who we are and what we do, so I copied the mission statement directly off the blog page and sent it to them.” So, thanks again, Derek, for drafting our mission statement, as it has already proved useful. Now, we wait to see what the Kalamazoo Kommittee makes of it all…….

Thanks to Phillip, the session proposals are in, with three send and one of those co-sponsored by the Research Group on Manuscript Evidence (Production and Reproduction, chosen because it seemed to have the most potential for manuscript evidence).

With these proposals sent in, we have made or first act as an organization! Not bad, since we were founded less than a week ago! Thanks all and sundry for the help.

As requested, here are our Founding Documents, to be treasured along with the Magna Carta, and one day surely housed in the British Museum. 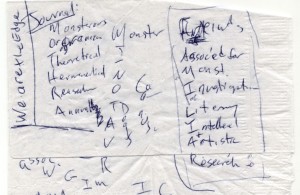 Showing our first serious contender for a name, FAMILIAR, and our proposed journal, MOTHRA (Monstrous Organization for Theoretical Hermeneutic Research, Annual), and a proposed motto: “We are the edge.”*

*A note on the scribal hand: These documents are clearly to product of an amateur scribe, perhaps of a provincial scriptorium. Palaeography proves difficult, with several abbreviations, but no abbreviation marks found in Capelli’s match to aid in deciphering.

Mildred Budny (whom many of you know from the sessions at this year’s KZoo), Director of the Research Group on Manuscript Evidence, has suggested that the RGME Co-Sponsor one of our session for next year, thereby increasing the chance that they take all three. Phillip (our session organizer, bibliographer, kilt-wearer, and, apparently, nerf herder) and I agree this would be a great move. The proposals are due tomorrow, so any comments are welcome QUICKLY.

Amazingly, we already need to send in our session proposals for Kalamazoo 2009. Phillip Bernhardt-House has very kindly written up three proposals for us, in the hopes that the Kalamazoo Kommittee will take two. Send comments asap, if you have any, since these need to be sent in by Thursday:

The medieval accounts of origins for monstrous creatures are varied and diverse, ranging from tracing these beings’ lineage from Cain or Ham (as in the Old English Beowulf and the Hiberno-Latin Sex Aetates Mundi), to placing their beginnings in the curse of a saint from more recent times (as in Giraldus Cambrensis’ Topographia Hiberniae or in the Old Norse Konungs Skuggsia), to even some texts which attribute monstrosity to what we would call “environmental factors” (e.g. the Rothschild Canticles). The methods by which individual monsters and monstrous races reproduce their anomalous physiologies are also equally varied, if and when such processes are outlined when they are not implied or assumed. Papers in this panel will focus on these accounts of the creation and procreation of monsters, both in a narrative sense and/or a textual sense (i.e. tracing the origins of a particular monstrous motif), and will illuminate how these accounts not only demonstrate the intentions and understanding of their textual authors and audiences, but also how these tales interpret and define the fears as well as ideals of humans in the past and present toward physiology, cosmology, ethics, sexuality, and the general existence in and engagement with the world-at-large.

Speculum Monstrarum: Monsters as Reflections and Shadows in Medieval Cultures

Monsters are always, in some sense, reflections of the human image, whether those reflections are simply a reversal of the original, or a distorted fun-house mirror producing surprising and frightening results. In a psychological sense, monsters are often an exhibition of the “shadow side” of humanity, that part which is never far away and bears an outline in common with the original object, and yet it never disappears unless the human object is entirely engulfed in darkness. As a result, study of the monstrous image can provide a profound insight into what a culture understands as the “light side” or original image of the human, in addition to an articulation of its opposite and what is excluded in the comprehension and construction of the human. Further to the exploration of these issues, this panel may also seek–like the speculum principis and virtuous conduct treatises of the premodern period–to attempt providing an idealized template of what constitutes a “good monster” (not necessarily in the moral sense) in both composition and behavior on a narrative level.

Jeffrey Jerome Cohen’s now paradigmatic manifesto on the importance of studying monsters and the monstrous, both generally in all time periods and cultures as well as in strictly medieval contexts, has influenced and inspired countless students exposed to his text in undergraduate courses, and likewise a great many working scholars and the studies they have produced since its publication in 1996. As an inaugural event for MEARCSTAPA, we seek in this roundtable to re-familiarize ourselves with the critical issues of the text, but also to evaluate, reconsider, and extend these theses for future consideration and deployment in subsequent studies. Founding members of MEARCSTAPA will share their interpretations and experiences of the text in research and teaching, and we will seek to have Cohen act as a respondent to the issues raised.

Derek Newman-Stille has written up a draft of a mission statement that I think is great. Here it is. Please comment on it!

MEARCSTAPA (Monsters: the Experimental Association for the Research of Cryptozoology through Scholarly Theory And Practical Application) Mission Statement

MEARCSTAPA is an organization committed to the scholarly examination of monstrosity as an area of social and cultural interest to past and present societies. Our inter/trans/post/pre-disciplinary approach allows us to explore the significance of monstrosity across cultural, temporal, and geographic boundaries. We are interested in a multivalent approach using materials on monsters and monstrosity from literary, artistic, philosophical, and historical sources.

The term “Mearcstapa” not only evokes the Grendelkin, perhaps the standard bearers for medieval monstrosity, but also describes the role of Monster Studies within (or outside of) “traditional” academics. Those who study monstrosity take on the role of Border-Walkers, broaching numerous traditional academic divides.

We recognize that human societies reveal a great deal about themselves in the monsters they create, and that the monstrous can be a mechanism for expressing social issues, interests, anxieties, and ideologies.

MEARCSTAPA was established in May, 2008 for the purpose of providing a forum for discussion about monstrosity in various media.